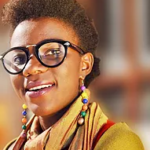 Ndinda Kioko is a Kenyan writer and filmmaker whose short fiction has appeared in several literary magazines and anthologies. She was recently published in the Africa39 project, a selection of 39 African writers under the age of 40 who are expected to shape the African literature of the future. Her works have appeared in several publications including Fresh Paint – Literary Vignettes by Kenyan Women — and Jalada Africa. Her short fiction was also recently featured on BBC Radio 4’s Shorts. She has written and produced two television shows for Mnet and is currently working on her third.

“My book is about a haunted young woman who quits everything and returns to an old childhood town in an attempt to conjure the fading memories of her youth. It is a story that charts the journey of remembering, exploring the relationship between a dead mother and a daughter; the relationship between a young woman and an old town and the loss and grief they all share.”