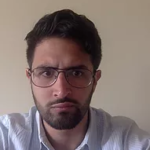 Ahmed Khalifa is an Egyptian writer. He left Egypt in 2010 to attend Columbia University. He has previously published The Coals Burned Low in Fiction Magazines.

“For at least an hour a day, I am waist-deep in Egyptian history textbooks, legal pads and highlighters. Though only in the research phase of my project, I have come to realize that skeleton outlines are skeletons in name only as they begin to outweigh the legal textbooks that also occupy my desk. I have also religiously been following current affairs in my native Egypt, relevant as they are to the book I hope to write, tentatively titled Zuhal. I am having great fun delving into Freud and Spinoza’s theories on superstition and hope to somehow reconcile that with the enlightened 21st century man and the depravity of which he is occasionally capable.”