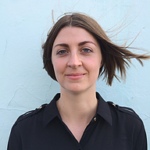 Simone Haysom was born and grew up in Johannesburg, South Africa. She moved to the UK to complete a Masters and then worked in development. Her job took her to Gaza, Haiti and Afghanistan, where she researched monographs on displacement and 9/11’s impact on the aid world.

This will be Simone’s first book, although she has published many shorter fiction and non-fiction pieces in African Pen, Prufrock, the Mail, the Guardian, Africa in Fact, the Humanitarian Exchange, and the Sunday Times. Her poetry has been published in Carapace.

“The book I’m writing is centred on the kidnapping and brutal murder of a young man, a known thief, and the subsequent arrest and trial of a well-known activist and her husband. The State has argued that the crime was an act of revenge for the theft of their TV; the couple’s defence has been that they are the victim of a police conspiracy, retaliation for their attempts to expose corruption and poor policing. These events unfolded in the midst of spiralling vigilante violence and an unprecedented commission of inquiry into the performance of the police; all of it in a city where everything is bitterly contested. I’ve been researching the story for the last 16 months and, while the trial isn’t quite over yet, I’ve just started hunkering down to write.”