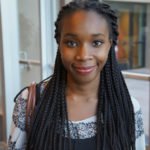 Nneoma Ike-Njoku is a Nigerian writer living in New Mexico. She is a recipient of the 2015 Awele Creative Trust Award and an alumna of the Farafina Trust Creative Writing Workshop, and was longlisted for the Golden Baobab Prize in 2013. She is in her final year at St. John’s College, where she studies French, Mathematics, and Laboratory Science. Her short fiction has appeared or is forthcoming in Transition Magazine, The Kalahari Review, NANO Fiction, Winter Tangerine Review, and the African Futures anthology.
My novel, tentatively titled Drift, is about an afro-psych rock band who get together as college students in 1970s post-civil war Lagos. Under the guidance of an overly ambitious and often erratic record producer, a group of five boys, near-strangers to each other and each trying to escape his own memories of the war, create an amateur rock band. They find almost immediate success in the psychedelic rock-obsessed musical climate of 70s Lagos until one of the boys disappears, leaving the others to try to piece together what might have happened to him. Drift will follow the band’s trajectory through the 70s and at the start of the 80s, and, in doing so, explore Nigeria’s rich psych-rock/funk music history, as well as questions of loneliness and alienation, and the bonds that can hold strangers tightly to each other.