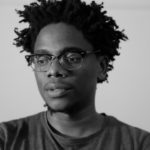 The novel is titled Let Your Children Name Themselves. The novel is told in three narrative voices, the dominant being a homosexual boy growing up in a village and the other two being the mother and the father. The reader finds the boy, named Babini, at adolescence, just as he is about to come to consciousness, both about the community he is growing up in but also about himself. The reader stays with him through boarding school until he is at a varsity studying Architecture, with many devastating and beautiful moment in between.
I think of the novel as a long poem, one that hooks the reader from the beginning, and then goes on to seduce, haunt, surprise, delight with both the poetry and the narrative.
Let Your Children Name Themselves, a line from Coded Language, a poem by Saul Williams, is a poignant title for the book. Immediately when I heard in the poem I knew that it captured what Babini goes through that if he had named himself, with a different name, a name carrying a different destiny to the one he had, would he be a different person.
Babini means two and duality is a theme that I intend to explore in the book, in subtle and overt ways.