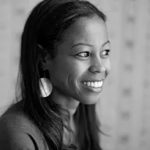 Fatin Abbas was born in Khartoum and grew up in New York. She gained a BA in English from Downing College, the University of Cambridge, and a PhD in Comparative Literature from Harvard University. She is a graduate of the MFA in Creative Writing Program at Hunter College, CUNY. Her fiction has appeared in Freeman’s, The Warwick Review and Friction, and her nonfiction essays and reviews on African literature and film have appeared in The Nation magazine, openDemocracy.net, Africa is a Country, and Bidoun, among other places.

This nonfiction book project deals with the history of slavery in Sudan, specifically as it relates to the legacy of slavery in my own family. The book takes as its starting point a poem that my grandfather wrote in the 1940s about his own mother. Slavery was officially banned by colonial authorities in Sudan in 1924, though the practice continued for some time after. My book will attempt to reconstruct the story of my great-grandmother’s slavery, and in doing so, to reconstruct the history of the practice in Sudan.