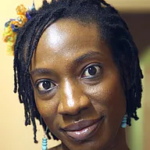 Yewande Omotoso was born in Barbados and currently lives in South Africa. Having worked for many years as an architect, Yewande studied part-time and completed a Masters in Creative Writing at UCT. The product of this degree was her debut novel Bombay, which was Short Listed for the 2012 Sunday Times Literary Award, the MNet Film Award and the 2013 Etisalat Prize for Literature. It won the South African Literary Award First Time Author Prize. Other published works include: Two Old People in the anthology Speaking for the Generation: Contemporary Stories from Africa, How About The Children (The Kalahari Review) and The Fish (Moth Magazine).

“In my story, a mother narrates and accounts for her estranged relationship with a daughter who has been missing for several years and is presumed dead.”