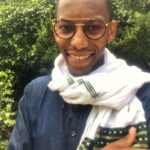 Abdul-Malik Sibabalwe Oscar Masinyana will write a speculative novel based on his 2013 short story,
‘The House of The Apostate.’ The novel will narrate the same Muslim couple’s struggles with
religious belief, and it will be set in a future Cape Town floundering from the effects of climate
change. Minhaj, a banker, and Jaanaan, a fine artist, as well as their two children, will be the four
narrators of a novel populated by an ensemble cast of characters exploring themes as varied as art,
finance, spirituality, religious reform, apostasy, disability, childhood, exile, climate change, and law
in Islamic, African and Western modernities.

Oscar is a Managing Editor of African academic journals at the Taylor & Francis/Routledge Africa
office, and an LLB candidate at the University of the Witwatersrand. He is the recipient of the 2018
International Society of Managing & Technical Editors’ (ISMTE) Ira Salkin Scholarship, and in 2016 he
was shortlisted in the literature category for the Africa Centre’s Artists in Residency programme. He
was the Deputy Editor of Prufrock magazine, the Managing Editor of the Paperight Young Writers
Anthology, and he has published short stories, essays and children’s books. He has a BA in Film and
Media Production and an MA in Linguistics from the University of Cape Town, where he was also a
tutor in the African Languages and Linguistics departments, a Writing Centre consultant at the
Centre for Higher Education Development, and a lecturer and tutor in Media Studies. He lives in
downtown Johannesburg and can be found on Twitter as @oscarsibabalwe.