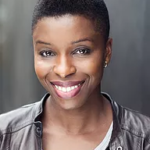 Noo Saro-Wiwa was born in Port Harcourt, Nigeria, and raised in England. She attended King’s College London and Columbia University in New York.

Looking for Transwonderland: Travels in Nigeria (Granta, 2012) is her first book. It was selected as BBC Radio 4’s Book of the Week in 2012, and was named The Sunday Times Travel Book of the Year, 2012. Shortlisted for the Author’s Club Dolman Travel Book of the Year Award in 2013, Looking for Transwonderland was also nominated by The Financial Times as one of the best travel books of 2012. The Guardian newspaper included it among its 10 Best Contemporary Books on Africa in 2012.
It has been translated into French and Italian.

Saro-Wiwa has contributed book reviews, travel, opinion and analysis articles for The Guardian newspaper, The Independent, The Financial Times, The Times Literary Supplement and Prospect magazine.

She supports Liverpool FC and is based in the UK.

Chocolate Citizens will be an exploration of the African community in the city of Guangzhou in southern China. Since the late 1990s, traders from mainly Congo, Nigeria and Ghana have travelled to Guangzhou to buy small commodities for sale in back in Africa. At its height the African enclave numbered 100,000, consequently earning it the nickname, ‘Chocolate City’. Although most African traders visit China on a short-term basis, a few of them have settled permanently and married Chinese locals.

In Chocolate Citizens Noo Saro-Wiwa will examine, among other things, the Chinese and Africans’ perceptions of one another; the cultural fusions and clashes; relations between the various African nationalities, as well as a closer look at their business dealings.