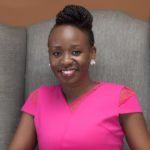 Where the Bougainvillea Blossoms

On the eve of the year 2000, members of a religious sect congregated in a mabati church in Kakamega awaiting the rapture. At the stroke of midnight, they are to climb a huge tree at the centre of the compound and jump: to be received by angels. After a few of them jump off the tree but aren’t snapped up mid-air by angels, the sect leader changes tact. Having spent months preaching about the apocalypse and warning his followers about the Y2K millennium bug, sect leader Jehova Wanyonyi easily convinces them to gather in church and ‘go to heaven’together.

Gloria Mwaniga’s Book will follow the life of the only member of the sect who survives; a precocious 12-year-old girl who survives because in her pre-teenage rebellion, she sneaks off to the nearby catholic church to join other children in the hitting of tins and drums to ward off evil spirits and usher in the new millennium. Left alone in a world that is supposed to have ended and with only the sect’s puritanical teachings to hold on to, Sabina will embark on a journey from the whitewashed corridors of a strict Catholic Girls Boarding School in western province to Eastleigh in Nairobi. As she navigates the tumultuous worlds changing inside and outside her body, Sabina will centre her being, challenge the binaries of existence and learn to deal with loss and disillusionment.

Narrated with humour and lightness, this story will be an exploration of the conflicts of a girl coming-of-age in a place deeply steeped in cultural, spiritual and religious beliefs. It will fuse history, fiction, folklore and myth in reimagining how mystical, religious and morality questions merge during the tumultuous transitioning to adulthood.

Gloria Mwaniga is a Kenyan high school teacher, editor and writer represented by Essie White of Storm Literary Agency, www.stormliteraryagency.com. She reviews books for the Arts and Culture pages of The Nation newspaper and has published five children’s books.

Mwaniga has been writer-in-residence at Ebedi Writers Residency in Nigeria. She is an alumnus of the Miles Morland Writing Workshop and the Kwani? -SLS workshop.  She has served as national coordinator of AMKA space for women writers and as judge of 100WordsAfrica and the Collins Elosiro Prize. She is also on the judging panel of the 2020 Afritondo Short Story Competition.

Mwaniga has published short stories, interviews, essays and poems. She holds a B.Ed. degree in Geography and Business Studies from the University of Nairobi.