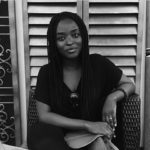 Eloghosa Osunde is a Nigerian writer and visual artist whose work revolves around mental health, sexuality and the psychology of identity and interpersonal intimacies. She is an alumna of the Farafina Creative Writing Workshop. Following the workshop, her selection of vignettes ‘Shapes’ was edited and published online by Chimamanda Ngozi Adichie. Her short memoir ‘Don’t Let It Bury You’ has also been published in Catapult. As part of the Writivism Mentorship Program, Eloghosa worked with 2016 Caine Prize winner Lididumalingani Mqombothi on her story story ‘And Morning Will Come,’ which was later longlisted for the 2017 Writivism Short Story Prize.

The Weight Of An Eye is a novel set in Lagos that follows two friends, Awele and Jide  — both of whom realize that they are queer from a young age — through their friendship in a secondary school in Lagos to their separate lives as young adults and their eventual reunion as adults. As they try to rekindle their old friendship, their parents (secretly aware of their children’s deviance, but obsessed with keeping up appearances and avoiding public disgrace) begin to push marriage on both of them. In a final subversive decision, Awele and Jide see an opportunity to build a safehouse for themselves; something new and different from what they were raised in.