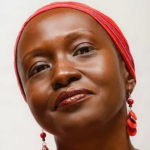 Doreen Baingana is a Ugandan writer and author of Tropical Fish: Stories out of Entebbe, which won an AWP (Association of Writers & Writing Programs) Prize for Short Fiction (US), 2003, and the Commonwealth Prize for First Book, Africa Region, 2006. She has also won the Washington Independent Writers Fiction Prize and been nominated twice, in 2004 and 2005, for the Caine Prize for African Writing. Ms. Baingana has also published two children’s books as well as fiction and essays in journals in the US, UK, South Africa, Nigeria, Kenya and Uganda. She has a law degree from Makerere University and an MFA from the University of Maryland and was Chairperson of FEMRITE, the Uganda Women Writers Association, in 2011-2013. She lives in Entebbe with her son.