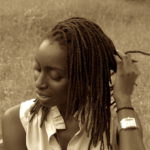 Ayesha Harruna Attah was born in Accra, Ghana. She attended Mount Holyoke College, Columbia University, and New York University. The author of three novels, Harmattan Rain, Saturday’s Shadows, and the forthcoming One Hundred Wells, she was a 2014 Africa Centre Artists in Residency Award Laureate and Instituto Sacatar Fellow. Her writing has appeared in the New York Times Magazine, Asymptote Magazine, Imagine Africa, and the Caine Prize Writers’ 2010 Anthology. She lives in Senegal with her husband and son.

KOLA! From Caravans to Coca Cola will chart the story of kola and how it went from being the coveted fruit of the West African caravans to inspiring one of the world’s most popular beverages: Coca Cola. It will weave historical research, oral accounts, and family narratives to find out what made it so important. It will also highlight how kola kept a link alive between West Africa and her descendants and how it formed part of the social architecture of some of the most important cities in present-day West Africa.