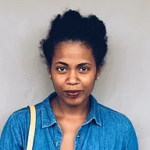 Akwaeke Emezi is an Igbo/Tamil writer and filmmaker born in Umuahia and raised in Aba, Nigeria. She was recently shortlisted for the 2015 Wasafiri New Writing Prize and her work has been published by Commonwealth Writers, Sable Literary Magazine, Specter Magazine, and the 2015 Caine Prize anthology, Lusaka Punk and Other Stories, among others. Akwaeke was a 2015 Writer-In-Residence at the Hub City Writer’s Project and a 2014-15 Harriet’s Gun Media QBWT-Artist. She holds an MPA from New York University and her work is online at www.azemezi.com.

THE DEATH OF VIVEK OJI is set within a multicultural community in the south of Nigeria during the late 90s, as the country transitions into democracy. It follows the story of Vivek Oji, a young man who is his grandmother returned. In his early twenties, Vivek suffers a breakdown that culminates in his death, leaving his distraught mother to piece together the last months of her son’s life and root out the secrets he was keeping. The book draws from traditional Igbo culture and examines liminal identities around religion, reincarnation, and gender identity/expression.