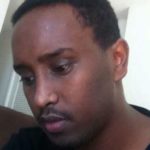 Abdul Adan was born in Somalia, and grew up in the Somali-inhabited northern Kenya. In 2006, he immigrated to the United States and studied English Literature at Washington University in St. Louis. His first short story was published by African-Writing in 2010. Other stories have since appeared in Kwani?, SCARF, Jungle Jim, Okike, Arab World Books, Gambit: An Anthology of Newer African Writing, African Roar, and The Caine Prize anthologies of 2014 and 2016. He has also contributed non-fiction to Kwani? and The Daily Nation. His short story ‘The Somalification of James Karangi’ was highly commended by the Caine Prize judges in 2013, earning him a place at the following year’s Caine Prize workshop in Zimbabwe. There, he wrote his Caine Prize-shortlisted story ‘The Lifebloom Gift.’ In 2015, Adan moved to Kazakhstan where he lived for just over a year, teaching English and learning Kazakh. In 2016, he collaborated in the translation Ngugi wa Thiongo’s story the ‘Upright Revolution’ into Kazakh, possibly the first ever translation of an African story into a central Asian language. Currently, he lives in Elwak, by the Kenyan-Somali border, and edits fiction for SCARF magazine.
My novel is about an eccentric, lucid dreaming, mentally drifting narrator and the unusual people he encounters on his journey through Somalia, the US, Kenya, Kazakhstan, and back to Somalia. His peculiar insights are revealed through fictitious scholarly articles and case studies. Among those through whose analysis he explores certain hidden desires and fears is a young religious extremist who must strip and apply lubricants to his kidnapped victims before execution, a Seattle woman deemed so airy as to be totally immemorable, and a kazakh poet who felt overburdened by the suffixes attached to his names as per Kazakh language rules.